A Brief History of the Central Catholic Library

The year is 1922 and Dublin is on the brink of Civil War. There is an atmosphere of tension and unease, especially in the heart of the city. The much needed library for Catholics is all set to open its doors on the 25th June in one of the city’s main thoroughfares – Westmoreland Street.

Three days later the war erupted and within hours the sound of machine-gun and rifle fire was clearly audible from O’Connell Street just a short distance from the library. It had indeed been launched in a baptism of fire. But it weathered the storm and has since grown from strength to strength over a period of eighty years. 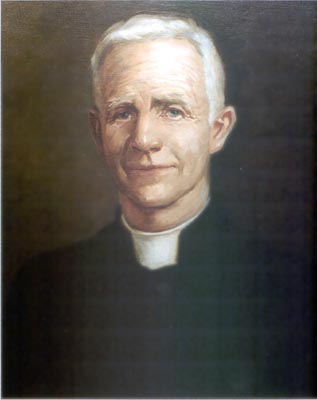 However, the task of providing a Catholic library for Dublin, and indeed, all Ireland, got under way. Fr Stephen Brown S.J., with the assistance of several prominent business people, forged ahead with determination and concern in order to achieve their objectives.

While this gap was being bridged other mammoth tasks still lay ahead. Not surprisingly as one must bear in mind that the library began with a mere 2,000 books and a capital sum of £200, a paltry sum for such an ambitious project even in those days.
As its presence became known, it received welcome cash donations and gifts of books from various European countries, also from Canada, Australia and even as far away as India. Fr Brown’s objective was not just to gather books, but ‘the best books,’ thereby forming a worthwhile permanent collection, not only of religious material, but incorporating works of artistic, social, educational and charitable interest

The early days were not without difficulties and the first set-back came when the landlords notified the library of their intention to terminate the lease of the Westmoreland Street premises. They planned to demolish and rebuild on the site.

Efforts to find a suitable satisfactory alternative failed. So the library was forced to close its doors and the books were stored in the offices of the Municipality by agreement with the Town Clerk. At the end of January 1924, two rooms were leased from Messrs O’Brien, proprietors of the National Service Garage in No 19 Hawkin’s Street. The library’s new home was next door to the Theatre Royal. The rent was £190 per annum and the initial cost of setting up must have been considerable.

Book shelving was purchased, electricity and gas installed in readiness for the formal opening at the new premises which took place on 27th March 1924. Fortnightly meetings were held, at which the average attendance was around twenty. It was not long until the previous users made their way to the new location. The work of expansion was resumed.

The various committees were quick to respond to the urgent need for funds and events such as sales of work, tennis tournaments, jumble sales, bridge drives and “Stop Watch” (another game!) were organised.

By this time subscriptions to seventy periodicals had been taken out and the first typewritten catalogues were being prepared. These volumes are still preserved. Gradually the value of the library came to be appreciated and donations of books were received from many quarters. Only for the work of the fundraising activities, the problem of keeping finances in order would have been much greater. By the end of 1926, the overheads had risen to £535 per annum, a considerable sum in those days.

In the late 1920s one of the unusual activities of the library was the distribution of Catholic literature to the crews of the lightships and lighthouses stationed around the coastline. This came about with the death of Mrs Knight Roche who for twenty years, had run the Ocean Star Society. This work was continued by the library’s Mrs Condell, who was assisted by a few members of the Association and the Legion of Mary.

Regular weekly dispatches of Catholic newspapers, magazines and pamphlets were carried to the lighthouses. The numerous letters received in return clearly showed that this service was fully appreciated by those whose lonely vigil protected the lives of many a ship’s crew in calm and stormy waters.

By the year 1928, the Hawkin’s Street rooms were proving to be inadequate and the lack of space made any form of expansion impossible. Fortunately, an adjoining room did become available and it was immediately taken over to enlarge the lending department. This meant an extra £40 a year had to be raised to pay rental. 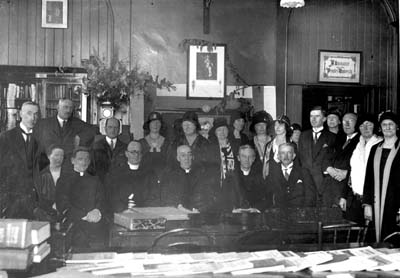 From the outset, the library provided reading rooms which were open seven days a week from 11 am. to 10 pm. Four daily newspapers were provided as well as Catholic weeklies from England, USA, Canada, Argentina, New Zealand, Australia and South Africa.

The facilities of the reading rooms were provided free of charge and were readily availed of by people from all walks of life. Members of all denominations were welcomed – a policy which still prevails.

Some voluntary cash donations were received from various parts of Ireland, England and USA. The Archbishop of the time, Most Rev. Edward Byrne, D D. donated £25 and consented to become Patron of the library.

From its earliest days, the library council was anxious to acquire works in Irish, German, French, Italian and Spanish as well as English and Latin. 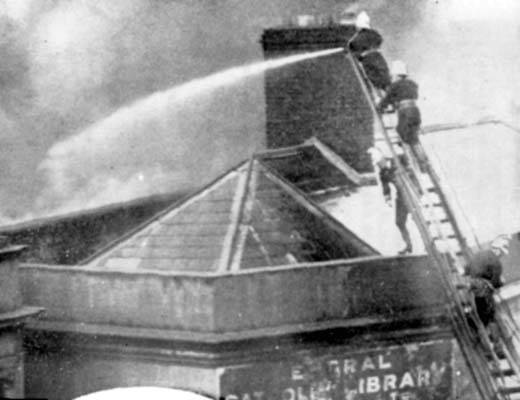 The library continued to grow and expand over the following years, but on the 9th March 1932 disaster struck. A serious fire destroyed the garage underneath the Reading Room. The library suffered severely as the floor of the lending departmant became unsafe and the windows and doors were destroyed.

Two valuable collections, the Healy Collection and the Works on Sacred Art and Archaeology, were almost completely destroyed either by fire or water. The library was forced to close for two months.

The industrious council and supervisors did not let this interfere with their plans for progress. A committee was set up to oversee the restoration of the library.

Writing of this tragic event, Fr Brown tells us how he and a few assistants “worked in a windowless room groping amid heaps of sodden, half-charred books in the hope of salvaging some of them.”

Immediately, urgent repairs were carried out. Extensive repairs, repainting, etc., were completed in the autumn. In spite of everything, the library was able to re-open on May 12th (1932), though many of its scars remained to “tell of what it had gone through.” 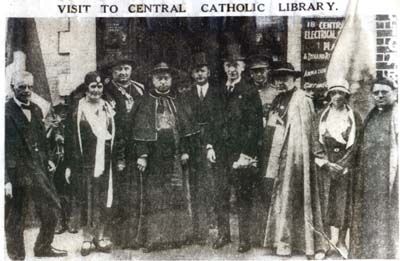 Just one month later the Eucharistic Congress took place in Dublin. It is recorded that many overseas visitors, including two cardinals, several prelates and various dignitaries, visited the library.

It became obvious that the facility had aroused considerable interest, at home and abroad. In fact it was to prove the inspiration for the establishment by a Jesuit priest, Fr William Hackett, of a similar library in Melbourne, Australia. 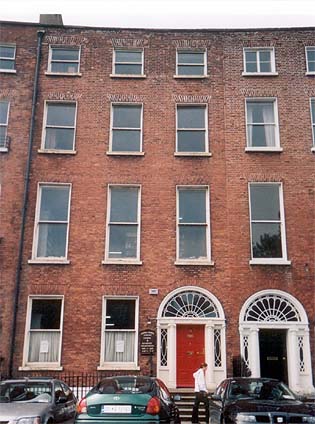 Soon the time came to consider yet another move to a bigger premises in order to cope with the demand for its services. A number of vacant houses were visited and inspected for suitability. The decision to purchase No. 74 Merrion Square was made in the autumn of 1933.

The last meeting of the library council to take place in Hawkins’ Street was held on Thursday, 7th December 1933. Eleven members of the council attended that historic event.

The decision to move to Merrion Square was influenced by the fact that plans were afoot for the construction of a cathedral in the square. Had this plan been carried out, the library’s location would have provided an attractive facility for those attending services in the cathedral. However, after some decades the plan for the cathedral was abandoned.

In 1940 Father Brown listed some three and half thousand novels and tales by Catholic Writers available in the Library.

Today, one wonders if Fr Brown could have visualised that the CCL would still be in existence more than 40 years after his death in 1962. The loyal work of volunteer supervisors, combined with the council administration, have played a vital role in ensuring that the best literature is available to all, regardless of class or creed.